Marihett and Derek Bredenkamp are a husband and wife team, making sauce in small batches. They have become a leading authority of super hot sauces in South Africa and together they are Johnny Hexburg.

They pride themselves on their large unique range of hot sauces, ranging in heat from mild to medium and super hot. The Johnny Hexburg brand is becoming known around the globe as the family continue to be driven by their passion to create high quality, well balanced and flavorsome products.

Eva is a film producer who crowd funded an idea to travel to Guntur, India to create a short film about Indian food, culture, chili and more.

The 30 minute film ‘Holy Chili!’ features footage never filmed before of some of the largest chili plantations on the planet. The film was recently nominated as an official selection at both the New Jersey Indian & International Film Festival 2018 and Society for Visual Anthropology Film and Media Festival in San Francisco.

Eva intends to continue travelling and exploring cultures and to share her discoveries with the world.

Thom is the co-host of the bi-monthly live podcast, Electric Chileland, a product and community focused spicy food talk show, co-hosted by Kendall Stadler, owner of Tasting The Heat.

Being an active advocate for sustainable farming in the Philippines, President of Philippine Hot Sauce Club, Chef and owner of Bad Boy Tikboy, Justin Yenko believes in only sourcing locally grown produce to produce his array of hot sauces.

With the intention of furthering his advocacies, Justin is currently in talks with agriculturists to establish a benefit for out-of-school youth. He currently has a farm in Cavite in which he plans to install a kitchen. There, Justin intends to employ wayward youth in the production of sauces.

With a capsaicin tolerance amongst the world’s elite, public figure and community heavyweight, Brianna Skinner aka Chilli Queen uses her ability to withstand exceptional heat where she has been a driver to help raise funds and awareness for those in need of a variety of causes, often breaking records for endurance chilli pepper eating – capping 35 of the official world’s hottest (Carolina Reaper).

Brianna is well known for her advocacy for gender equality and equality in every form.

As well as hosting a YouTube Channel and successful Facebook recipe group, Brianna has also been a spokesperson for the industry and community in a recent BBC Radio interview.

Verne is a committed and highly engaged member of the global community. He is very well known for his passion for all things chilli and spice. As well as creating his own range of products ranging from chilli infused chocolate to mango chilli drops, Verne is also the New Zealand distributor for the world’s hottest corn chips and also distributes trending industry favourites.

Verne continues to be a great ambassador of the global community.

Born in Wales UK, Dan has been growing chillies in excess of 17 years, and making sauces commercially since 2012 as Chilli of the Valley (www.chilliofthevalley.co.uk). From a relatively young age Dan has had an interest in hot food, in particular Asian and Mexican cuisine. He features as part of the Mexican and Chilli experience days at cookery schools in the UK, including working alongside BBC “Cook of the Year” 2015 Jo Ingleby.

Dan is passionate about cooking with products he grows himself, and also using ingredients he can source locally wherever possible in order to support his local economy, this often results in a number of limited edition seasonal batches of sauce, which guarantees the ingredients used are as fresh as possible with a low carbon footprint. His sauces feature at food and chilli festivals throughout the UK, and he has collaborated with local breweries, making beer based chilli sauces and chilli based beers. His sauces have also been posted all over the world, including Australia, USA, South Africa, New Zealand, Canada and across Europe.

He has won a number of awards for some of his chilli sauces, and came second place in the 2018 Global Chilli Community Spirit Award. Whilst second place is an enormous achievement in itself, he was the only finalist from the UK Chilli community, which in itself is an accolade to be proud of.

With a keen interest in flavours and all things chilli, Dan is clearly passionate about what he does; and is always keen to help budding enthusiasts, whether in chilli cultivation or hot sauce production, wherever he can.

Jack is the current Guinness World Record holder for the most weight (146.27g) of Bhut Jolokia (Ghost Chilli) consumed in 2 minutes achieved in Feb 2018.

Also in 2018, Jack was awarded 1st place in the Global Hot Sauce Awards – Community Spirit Award in which he achieved the highest number of votes.

Jack is a well known public figure in Italy and other parts of the world. His International Facebook group: “JACK PEPPER AND THE MAGIC CULTIVAR (INTERNATIONAL GROUP)video assaggi ecc” recently reached over 12,000 followers.

In November 2018 he starred on Tú Sí Que Vales, an Italian prime time TV talent show where he worked his way through a variety of the hottest peppers on the planet all the way to the hottest gobsmacking the crowd and judges.

Sister of Guinness World Record holder, Giancarlo ‘Jack Pepper’ Gasparotto, Giorgia is a renowned international visual artist who has strong ties in the arts and fashion and hospitality industries.

Giorgia managed a small restaurant in Egypt and used her PR skills to turn the restaurant into a successful global brand that continues to grow today.

She is a strong member and supporter of the community who loves a bit of heat in every meal. 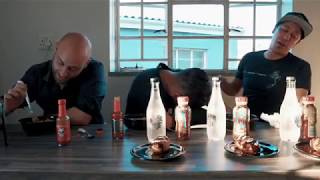 How did we start making hot sauce?